First off, yes, the title of this post is misleading. I do know it’s not summer anymore. In fact fall arrived days ago. But for the past week it’s been hovering near the century mark, so it still feels like summer. Relief is on the way, though: temperatures are forecast to drop almost 20 degrees today. Yippee!

I’m not by nature a hot weather person. Even though we’ve lived in many places known for hot and/or humid summers – Sacramento, Madison (Wisconsin), New York City, Phoenix – I’ve never been able to fully reset my internal thermostat, because I grew up near San Francisco, where billowing fog was the norm and summer nights were meant for sweaters. And I’ve discovered it’s in my bones: whenever I visit the Bay Area, my first glimpse of the fog bank never fails to arouse me from heat-soaked stupor.

In any case, I’m ready, more than ready, for fall. After all, there are things to be done, especially in the garden.

Beyond a few minutes at a time, though, I can’t get motivated to work in the garden. Of course, sometimes I wish I were one of those stoic types who push through and just do it. But I’ve learned to respect my hot weather malaise; it’s taken up residence, and clearly, has no intention of relocating any time soon.

So as a result of all the heat, I’ve noticed a creeping anxiety at times, because I’m not getting any cleaning up or cutting back or deadheading done.

In fact, I don’t even remember when I last did any weeding. Maybe July? Probably. When we had friends to dinner and lit candles and drank wine under the big birch trees.

Now here we are, months later. The weeds have advanced. The butterfly bushes have rocketed towards the sky. 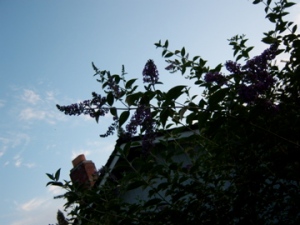 The vines are clinging to anything and everything in their paths, even laughing their way up the redwood trees. 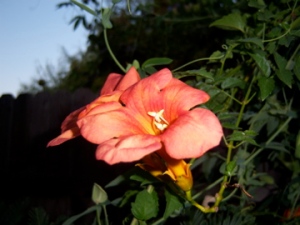 The salvia and lavender are squeezed together like office workers in a too-full elevator.

And the trailing geranium has spilled itself way over onto the patio.

In short, what I have on my hands is an unrestrained garden.

A WILD LATE SUMMER GARDEN! And you know what? I love it. 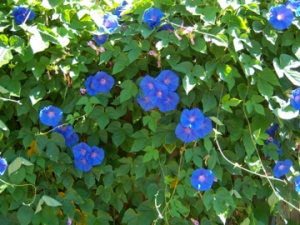 I’ve written before that my garden teaches me things, and the lesson I’m learning during these early autumn days is that WILDNESS is too scarce.

We rarely allow ourselves the freedom of it. Instead, we keep it too much in check, bottled up, fearing that if we let go of some control we will be judged as flighty. Unreliable. Impetuous.

Or worse yet, we believe things just won’t work out. We say, “Yes, but,” the phrase that stops so much potential WILDNESS in its tracks. We find ways to tune out the language of our wild heart when it is speaking to us.

Which is interesting, because most studies report that when people actually do loosen up around their edges and take a step on the path towards wildness (or unconventionality or risk-taking or playfulness or whatever you want to call it), they almost always say they don’t regret it, even if it didn’t work out the way they expected.

So today, my small act of wildness is about letting my garden go a little wayward and rangy for a while longer, and in the process, stretching myself as well. 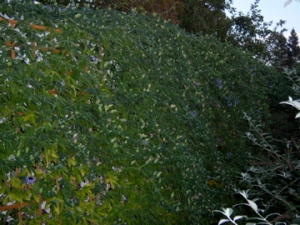 How about you? What have you learned in your own life about WILDNESS? How do you honor that part of yourself? And what would it look like to let it roam more freely?

I’d love to hear from you about it!

Why not start now?

4 thoughts on “My Wild Self and the Late Summer Garden”