Long ago it was David Burns who got me thinking differently about motivation. 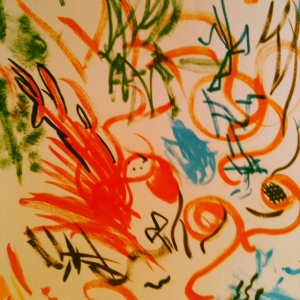 There was a moment when my spine straightened, body coming to full attention as I read a certain passage over and over again.

Within that passage was this nugget of wisdom: waiting around for motivation or inspiration or whatever to strike is often futile, because it’s action that creates motivation.

Once you take action and the motivation/momentum starts to flow it will affect your mood. And yes, like the book says you’ll no doubt start feeling better. Maybe you’ll even discover you’re feeling good!

Got that? I bet you do. Because it’s been said a million times over since then.

I’m guessing you’ve experienced it yourself: starting, just starting, in spite of your resistance.

Letting the action carry you into whatever you’re doing.

Then voila, that beautiful blossoming of motivation and inspiration and improved mood.

But the thing is, starting is hard.

Most of them were easy. Continuing education units that I could knock off by attending some weekend seminars. But there were two – real classes – with assignments and papers and tests and grades. (And yes, I still have one more to finish.)

And oh my, how my procrastination set in. Because I’d already done school and didn’t want to again. Because I’m older now and I questioned whether my memory was up to snuff. Because I hate tests.

So as much as I love David Burns and his nugget of wisdom, action had slipped out my back door and was nowhere to be found.

Until, that is, an unconscious ally rode to my rescue, whispering: You can do this.

She, as it turns out, was my imagination.

Dear sweet imagination, how I love you.

She began her work behind the scenes and I didn’t even notice at first.

She started feeding me future images: me rising early, settling in for at least a two-hour study session; me carefully organizing and categorizing my materials, so I had quick access; me diligently doing research for my papers.

She even went so far as to have me write down a schedule for how I would manage my time during the semester.

Now if you know me, this is hilarious.

I’ve never approached my studies in such a structured way. But my imagination was wise enough to know that conjuring up images and feelings of my archetypal Inner Nerd (she with the big thick glasses and calculator in her pocket) would somehow comfort me and get me going.

Once I started, though, my Inner Nerd took a backseat and my natural rhythms kicked in. I could study whenever I wanted. Sleep in and still get my assignments done. Spread my notes all over the place and still learn the material.

But I’m not sure I would have gotten there so fast without the prologue – that slightly wacky story – provided by my imagination.

So now I’m taking the liberty of tweaking David Burns’ nugget of wisdom:

What do you think?