The Destroyer becomes our ally when we recognize the need to change or give something up without denying the pain or grief involved.

This morning I woke up thinking about Carol Pearson.

Actually, I was thinking about something Carol said eight years ago in Minnesota. About 10 of us were sitting in a Holiday Inn conference room and she was teaching us about the assessment she created: the Pearson-Marr Archetype Indicator/PMAI. (Kind of like the MBTI but focused on our unconscious rather than conscious processes.)

Anyway, Carol was talking about the Destroyer archetype.

The Destroyer is all about deep-down metamorphosis, the kind that demands we look loss in the face, and then let go, give up, hand over what no longer serves us on our journeys. So yeah, it can be distressing and not always pretty.

Carol said a lot of people score low on the Destroyer, which on the face of it would indicate that the archetype isn’t really active in their lives. Often it’s a false low score, though, because the assessment asks about unwanted or challenging change and loss. People kind of go into denial around this and skim through the questions. 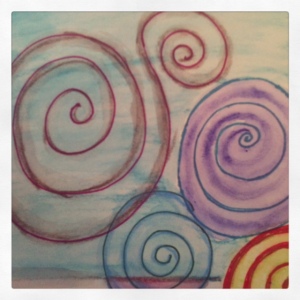 After using the PMAI with clients for years, I’ll vouch for that.

People can feel pretty vulnerable around the ouchy parts of their transitions, so they check out a little in an effort to distance themselves from that. But the thing is, even the most-desired transitions require some discomfort around letting go and moving on. And like Carol said in the training seminar, it’s not unusual to worry that you’ll get depressed if you allow yourself to actually go there.

Then she looked up from her notes and said, “Of course, depression is not the same as sadness.”

She meant that it’s okay to allow ourselves to feel sad. That sadness is an emotion, like any other. It doesn’t necessarily mean we’re depressed.

But you’re smart so I bet you already know that. I know it too. Still, for some reason I woke up thinking about Carol and the Destroyer and the difference between sadness and depression. Clearly, there’s something I want to say about it, this Destroyer-Sadness-Not-Depression thing. It’s hard to put into words.

Maybe I just want to tell you that I’m intimately familiar with this Destroyer character. I know what he looks like.

The Destroyer of my imagination is dark and faceless, sort of like Dickens’ Ghost of Christmas Yet to Come. He’s witnessed a lot in the past decade of my life, and not just the growing pains of life and work and relationship transitions. He’s witnessed a lot of death too. For both Dave and me.

But like Carol also says: An awareness of death can call us back to remember what truly matters.

She’s not just talking about awareness that we’re all going to die. She’s also talking about awareness of the hundreds of other losses we’ll encounter, like relationships, expectations, abilities, experiences, passions, ideas, beliefs. She’s encouraging us to turn toward the awareness (and sadness) that this is the cycle of life, repeated again and again in ways both small and large.

There’s a beautiful shape and color within that awareness and its companion sadness, I think.

Maybe that’s what I really want to tell you today.

It’s a spiral shape for me. How do I know this? Well, I looked down at the notes I scribbled in advance of writing this. I hadn’t realized it, but right there in the middle of the page I’d doodled a series of spirals. I doodle those a lot, actually, rather unconsciously.

It’s funny, because I didn’t know what the spiral symbolized until a few minutes ago. Truly, I am still a naif about some things (I like that about me though).

So here it is: the spiral symbolizes the cycle of life-death-rebirth. The spiral is another face of the Destroyer.

You know, I sure do love it when the collective unconscious gives me such a gracious nudge.

Finally. I know why I woke up thinking about Carol and the Destroyer and the sadness-that’s-not-depression.

And here’s what I truly want to tell you: when the Destroyer is my long-term house guest and I’m in that sadness-that’s-not-depression, it helps me to turn toward the spiral. I draw it. Notice it in nature. Walk it (without even realizing it). Trace it with my finger.

Eventually, it brings me to the place where I remember the lessons of loss, death and rebirth. 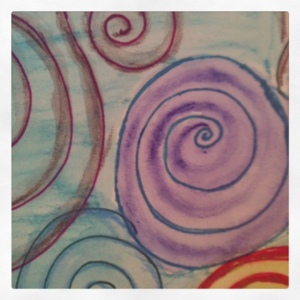 Thankfully, it calls me back to what truly matters.

11 thoughts on “turning toward the spiral of life”